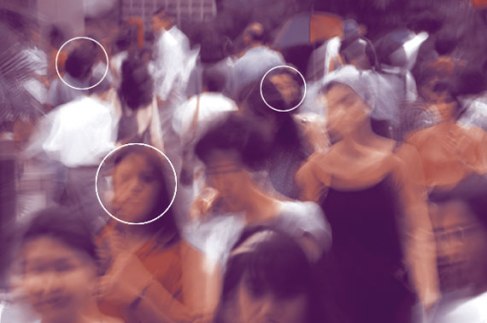 Andhra Pradesh coastal area belt is infamous for trafficking and sex trade where a number of targeted interventions for HIV awareness and mitigating violence have been proposed by the Government. For the 12th Five Year Plan, the Planning Commission of India opened a window to the civil society whereby it can propose policy recommendations for social inclusion of various groups.  For this purpose I went to the Coastal area belt and facilitated discussions amongst community researchers with the purpose of mapping existing knowledge and practices pertaining to their access to social schemes. These community researchers come from the sex workers’ community itself and are trained by the NGOs.

I sat through a number of discussions, listened to their stories and went through case-studies with them and the members of their community. Their experiences of violence and hurt will probably leave you numb for a long time, not only because it is difficult to imagine but because after a while, the comprehension of that violence and pain starts receding. Their profession, life-choices and livelihoods draw random opinion and reaction from the crowd and media, but what gets missed out is their persistence and resilience to mainstream themselves, and the continuous education they provide to themselves in order to achieve that.

We discussed about many government schemes like housing, pensions, health services, education and their relative access to those schemes:

‘Are you able to access these government schemes?’ I asked.

‘Was it the paper work?’

‘Partly. It is difficult to arrange for all the documents. We have no proof of residence and bank accounts. They know it.’

‘Then, what is the reason?’

‘The officials don’t acknowledge us’.

‘They don’t even look at us in the eye. Sometimes, they abuse us and ask us to leave. Don’t know why they do that. We thought it is our right to access these services. We try our best to arrange all the documents. But these officials keep asking us to come on some other date.’

‘We come everyday to their offices, wait and then go home. Often they ask us provide them services too…’

‘Have you ever complained or given a letter in the grievance cell?’

‘Where is the grievance cell?’

… and the discussion goes on.

What I was suppose to gaze was their access to these social schemes. As an analyst, I can determine the inadequacy of certain benchmarks and requirements. Especially for them, for example, the pension receiving age for sex workers cannot be 60 or 65 as it is for others. But then in the long run this takes a back-seat. What I could not stop gazing was their ability to deflect their pain, face the insensitivity everyday, brush themselves up the next day and try again, hoping someday the reaction will be different… and because access to those schemes is important to them.

My purpose here is not to narrate tales of suffering and violence. They get their occasional due mention in the media, except it is not ‘their’ voice nor it even remotely captures it. In the media, it is often their story narrated by someone else – the way their problems, issues, lives are understood and presented.

I feel, this goes beyond the dimensions of social bias against a certain class (which is so pervasive in our Indian society). It is social bias with financial and emotional liability thriving in our social set up which conveniently hangs on a patriarchal framework.  It is a space where every spectrum of life – body, emotions, thoughts, power, control- mix together to form a blur, and where the anger with the ‘system’ is not about corruption, service provisions etc but about insensitivity and non-acknowledgement for being another human being… and being labelled for what we know as the world’s oldest profession. We all feel vulnerable in our daily lives, but it comes and goes as we move from one circumstance to another, pushing the walls and shuffling the change. For them, the constant is the change.

How have they responded, you would ask. Some of them have mobilised themselves into Community Based Organisations (CBOs) and are learning to communicate with the government in their language – write letters to concerned officials, devise methods to get access to facilities such as Aadhar card, ration card and supporting documents to eventually get access to basic necessities such as pensions, scholarships and medicines etc. The CBOs also assist those in need. In one such case, they took  charge of a girl’s education whose father died of HIV, and also wrote a letter to the education officer, requesting for a cycle as her home was far away from the school. After a lot of paper work and attempts to meet with officials, they eventually managed to get her a cycle. There are cases of CBOs enlisting hidden sex workers identified as HIV+ which has made medicines and hospital accessible to them. CBOs’ attestation has facilitated opening of bank accounts by many members of the sex workers’ community. This is a critical step towards accessing services such as Housing and Aadhar card.

The complexities involved in their cases are overbearing with deluge of questions to answer and the basis of this could probably be our societal non-acceptance to the reality of this livelihood. But I was humbled by their resilience to relentlessly pursue the ‘system’ to demand entitlements and their basic citizenship rights; rather than waiting for the ‘system’ to wake up. My trip to the sleepy town of Rajahmundry in Andhra Pradesh was rather sudden and unplanned but immensely enlightening. After spending time with them and listening to their experiences and testimonies, I can say that nothing could have ever prepared me for that experience.