Megha Singh writes about her experiences with domestic help in India and in Singapore. She further elaborates on the life of a maid in Singapore through a creative piece – an email a maid writes to her daughter living in another country.  Like an independent reviewer of this post said, “This might be a fictionalised account, but every line is part of a conversation or a thought taking place right about now”.

As one afflicted with a high functioning form of OCD about cleanliness and organization, I have always shared a special bond with my maids. After all, if not for them, all I would do all day is clean my house. A few years ago, when I was living in Mumbai, I dropped by my maid’s house one day. Let’s call her Phoolwati. She was a part-timer who came to sweep, mop, wash utensils and clothes, dust the house and clean the bathroom every morning. She was paid around 1500 rupees per month for her efforts.

Phoolwati lived in a sprawling, haphazardly-built, pucca complex of rooms, which was probably illegal. She, her husband and her two kids lived in one small room with a bed, a TV, a fridge, a cupboard, a number of suitcases, a tiny kitchen and a tinier washing area. I had seen such homes on TV before but actually being inside one and realizing how she lived day to day jolted me. The timing of my visit was all wrong. I arrived at the same time as the complex’s daily supply of water so I was in everyone’s way as they went about filling buckets and pots, washing clothes and utensils, cleaning and bathing. As I walked out, a man was getting beaten up by a couple of women for breaking the water queue. I left hurriedly before I became their next target. In those days, a friend and I lived together in a portion of a hall of a 2 BHK apartment. I was quite unhappy with my living situation. After my visit to Phoolwati, I decided that I would be grateful for what I had and never complain about how I lived ever again. Needless to say, that resolve lasted one day.

A few years later, I came to Singapore with my husband and we hired a part-time maid or domestic helper, as they are called here. Compared to India, it is really expensive to keep a part-time maid in Singapore. They charge 15-20 SGD per hour (1 SGD = Rs. 47 approximately). Here, there is no concept of maids coming daily to work. Usually, people hire part-time maids to come once or twice a week for a slot of 3-4 hours. For example, the part-timer I have now, let’s call her Lily, comes once a week for 4 hours and in those 4 hours, she cleans the kitchen, vacuums, mops and dusts the house, cleans the bathrooms and washes (in a washing machine) clothes. But the system of part-time maids is not really prevalent in Singapore.

Most people here keep full-time maids who stay with them and apart from cleaning and washing, cook, baby sit the kids, tend to the elderly and do a number of other chores as decided by their employer. This makes much more economic sense. The employer is supposed to provide the maid with a room of her own and daily meals apart from a monthly salary, usually starting from 450 SGD a month. There are other initial costs involved including a fee for the employment agency which handles all the paperwork and formalities. Maids in Singapore usually come from the Philippines and Indonesia and to a lesser extent, from India, Sri Lanka, Myanmar, Bangladesh, Hong Kong, Macau, Malaysia, South Korea, Cambodia and Thailand. Their contracts usually stipulate the work they will do, maximum number of hours they will work in a day and a weekly day off but given that the power balance in this employer-employee relationship is heavily skewed in favour of the employer, there is ample room for exploitation. So in more benign cases, a maid is overworked, not given her weekly off, not allowed to have a phone so that she doesn’t make boyfriends and her passport is confiscated so she can’t run away. In grave cases, they experience physical, mental or sexual abuse. Lack of information and a support system, fear as well as debts incurred to pay agents to get jobs in Singapore, sometimes lead maids in such situations to not seek help from anyone – the police, the employment agency, the government, their embassy or various migrant worker support groups.

Adapting to Singapore is not easy for them. Most come from villages and small towns where their life is completely different. For instance, they may never have seen a microwave or an electric stove but once employed here, they are expected to know how to use them proficiently. Moreover, in the absence of family and close friends, they often get lonely, depressed and homesick. Many have husbands and children back home who sometimes, they don’t see for years. Often, many enter into unsuitable and unsatisfying, casual, physical relationships which add more angst in their lives. Jasmine (name changed) was the first maid I met in Singapore. She was a part-timer as well. Over time she shared her story with me – after graduating high school in Philippines, she went to Malaysia to work as a maid. Soon, she was in a romantic and physical relationship with her employer – an elderly divorcee. He was sophisticated, dignified and pampered Jasmine like a princess. For some time, she was really happy. When Jasmine became pregnant, initially he was very supportive but when she gave birth to a girl, he wasn’t interested anymore. He wanted a boy. Now Jasmine’s daughter stays in Philippines with her mother while Jasmine slogs in Singapore, trying to earn enough money for her daughter’s schooling. It’s not easy though. She works two four hour shifts a day, six days a week. Her work is physically exhausting. Jasmine is in her 30s and her body has started giving up on her. Employers are often rude and critical and not timely with their payments. Often she gets hit on by single male employers. She used to have a boyfriend but she ended things with him because he would keep cheating on her.

As I learnt more about Jasmine’s life, I couldn’t help but compare it with that of Phoolwati and I think Phoolwati was better off. Sure, she was very poor. She had no savings and her family survived month-to-month. But at least she had a family to go back to everyday. A home to call her own. A support system of friends and neighbours. There were family outings and celebrations during festivals. She fought with her husband and then made up with him the next day. She drove her children to tears with a scolding and then tickled them till they laughed. Jasmine was all alone. She had friends here and on her day off, she would hang out with them in parks or outside malls. But that’s about it. There was no one she could rely on. She missed her daughter, often crying bitter tears but she had no choice. She would not earn anything if she went back to her village. How would she support her daughter then? But maybe Phoolwati and Jasmine would disagree with me. When I met Jasmine, I had just moved to Singapore. Despite our totally different backgrounds and circumstances, I had a lot of empathy for her. After all, I too had left behind family and friends to move to a strange, new country. The only person I knew was my husband. With time however, I found work and made friends. I have a child now and I feel like I have created a complete, fulfilling life for myself here. Jasmine however is still all alone.

Following is a fictional email a maid in Singapore writes to her daughter back home. 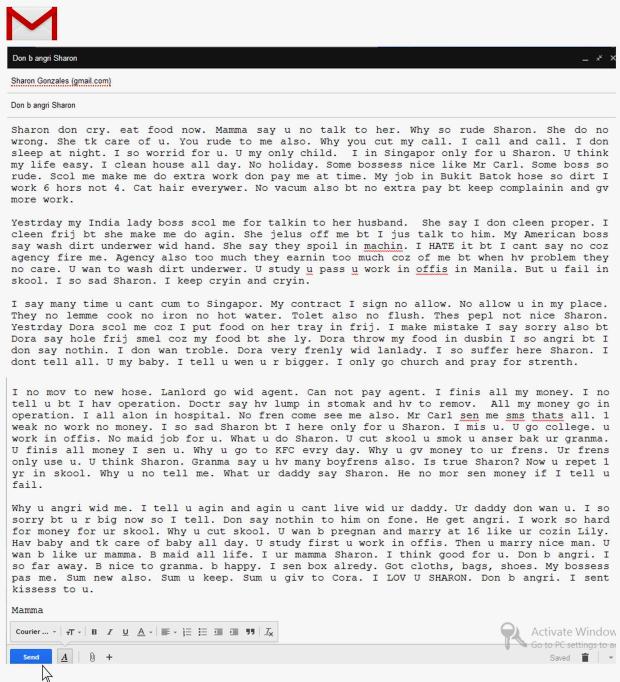 Megha Singh has been living in Singapore for a while now. She draws inspiration from her observations of domestic helpers in Singapore and her discussions with them. She is a writer and an aspiring entrepreneur.

← Come India, Let’s All Hate Arvind Kejriwal
When I grow up I will be a good girl →